There’s so much more to a book than just the reading. 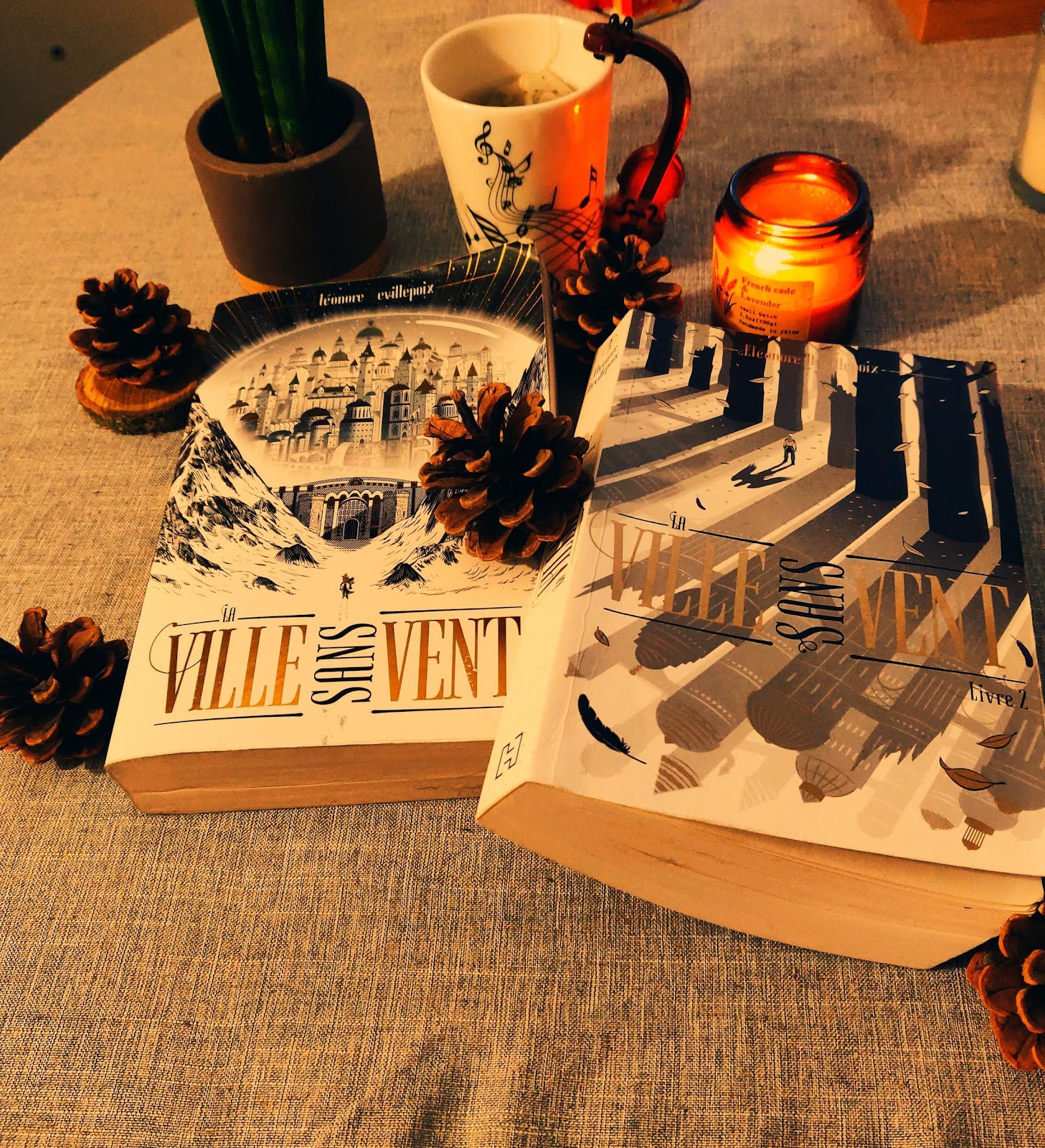 A book review coming all the way from France. Let’s give a warm welcome to Melody who graciously accepted to write here for me. Without further ado, her she is

As a female French reader, I am amazed to see the French Fiction Fantasy literary scene becoming richer and varied. For those of us not lucky enough to grow up in the countries of J.K Rowling or Robin Hobb, I find it comforting to see all these new lady writers with faraway lands and magical stories to tell us.

Eleonore Devillepoix, the author, very French, right? is not an exception. Her two books under the title “The Windless City” (“La Ville Sans Vent” in French) take us to this city called Hyperborée. Governed by magicians and protected from all the terrible snowy weather around it, by a sphere made of magical material. Thanks to this enchanted dome, the wind never blows in the city, hence the title.

But, as every fiction has it’s part of truth, Hyperborée isn’t so different from our western cities. Built on seven levels: the higher levels belong to the wealthier population. You have to pay a fee to travel between zones. However, if you started on level one, there is almost no chance to reach the seventh level. There are emigrated people staying in one place of the city, and for whom communitarianism is the only way to survive and not being alone. The first level is damp with sewer water and diseases. The seventh level contains more wealth than the six other put together.

The government formed by one centenarian king, the Basileus, has a few old minister mages who composed the Magisterium. Interestingly enough, women aren’t allowed to be a part of the political landscape.

The well-to-do frown upon the poor. Few have power; many live in poverty. Sounds a little bit too close to home, am I right?

In this delightful city, we meet Lastyanax, a young graduating mage who has just got his diploma and is coming out of the evaluation room to find his mentor, who happens to be the Leveling Minister, dead.

Everyone thinks it was an accident Lastyanax doesn’t. In less time needed to say “dead magician,” he finds himself walking in his mentor’s shoes in the Magisterium to become the new Leveling Minister. Good luck with that when you’re only 19 years old!

At the entrance of Hyperborée is Arka, a 13 years old girl who, despite her young age, seems to have a troubled past, and seems to be quite resourceful to get herself out of bad situations, is waiting to enter the windless city. She is looking for her father supposed to live on the seventh level of Hyperborée. Arka comes from a distant region, Arcadia, where the Amazons live. However, this piece of information must remain secret because the Basileus of Hyperborée hates the Amazons fiercely. If she is suspected to be one of them, it will be the death penalty. After some adventures, she managed to pay her way through the seven-level and passes an exam to get into the Hyperborée magician school. Yes, the same one from where Lastyanax just graduated; I know, what are the odds? And guess what? There is more as he is now a minister; he has to have a disciple. Right again, you’ve guessed who!

Eventually, these two characters find their way towards each other. Like the weirdest brother and sister you may find, one trying to find his place and to prepare his future, and the other in search of a family who will right the wrong of the past.

I don’t want to tell you everything about the book. No spoiler alert is needed; hopefully, these few lines will hook you.

What I loved most about this story is that even if it is fantasy, every question is real, very close to what we know. If many aspects of this book were to be transposed in our world, nobody would be shocked. I guess this is what the writer achieved by telling us this story. Being the fantasy fan that I am, I was thrilled by all the non-realistic features that populate the narration.

As I said earlier, I am very proud of the new French fantasy scene. After all, fantasy writing is not like the Magisterium, in Hyperborée, where only men are allowed.

I hope that you will find it in an English version, and if not, maybe it is the time to learn French (it is quite a fun language, trust me)! Au revoir!

Wondering what to offer for the Francophile in your life? Now you now 🙂

To all my American friends celebrating today,”Happy Thanksgiving”!

Talk to me, I am listening :-) Cancel reply